A male patient, age 47, himself a doctor, went to a dentist for his routine checkup though he had no complaints at all except little purulent discharge occasionally from his gums & according to dentist he couldn’t find anything on examination so dentist did his OPG or OrthoPantomoGram (a kind of dental x-ray) and it was revealed a huge cyst in the lower portion of his mandible on the left side. Then he was referred to an orthodontist and the biopsy was done and it revealed that he has – Infected keratocystic tumor. 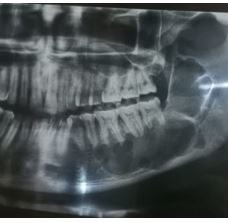 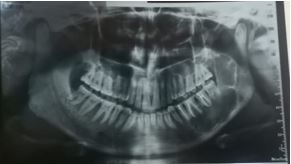 (First two x – rays – Image No.1 & 2 are before starting of Homoeopathy treatment) According to orthodontists, there is currently no effective treatment for it & surgical excision to remove the whole cyst lining is the only choice & still, according to them, is difficult to cure. (source – Wikipedia). So, this orthodontist only made a small opening in the cyst area and irrigated the lesion and advised the patient to do so on regular basis. At this time, this patient came to me. After going through his case history and by going through his x-rays, I started Homoeopathic medicines a year back & the results are astonishing. Within few days of his Homoeopathy treatment, his pus discharge completely stopped & gradually, his cyst size reduced & the new normal bone formation was clearly visible in his repeated x-rays. 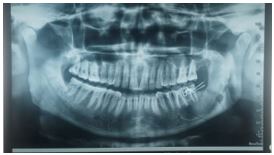 Mrs. N, age – 39, consulted for a rash all over the body since 2 weeks, dark-oval patches, Dry, burning, now reddish & coalescing with each other – covering whole of trunk, thighs, neck & arms & little on face too. Generalized peeling off of the skin, cracks at the corners of all the folds. Also, few moist patches at folds. She also complained of chilliness usually around 6 am & if she goes in balcony or if she drinks cold water. Little dry cough is also there. She received – Mezereum 200, in in-frequent doses to be repeated only when needed. Follow-up after 4 days – her trunk rash is reduced by more than 50%, face & neck reduced almost 90%, but the rash on extremities was increased. Follow-up after 1 wk – all rashes reduced considerably, almost no complaints at all. Follow-up after 2 wks – No rash visible at all anywhere on the body & no itching at all. Feeling very much better.

Mrs.S, age 29, consulted on 16/12/2001for severe asthmatic attacks with coryza & sneezing which was always worse indoors & rainy weather & was relieved a little when she remained in open air. In the interview, she mentioned about her nagging mother – always forcing her views on patient so much so that patient was unable to bear her continuous nagging & forcing, BUT at the same time she couldn’t stay without her mother. Mother never appreciated her or showed any affection towards the patient. The first attack of asthma was triggered by mother’s continuous lecturing about patient’s love affair… Gradually patient got a feeling that – I have to fear my mother as she is dominating & can insult me in front of anybody & she tortures me, BUT at the same time, I need my mother!! Patient also had fear of injections, needles & lizards. Calcarea Mur 1M was prescribed in in-frequent doses. After this medicine, her frequency of asthmatic attacks was reduced by 50% in first 3 moths & now in 2015, in these 14 years, there was not a single asthmatic attack.

A young girl, aged around 17 years was referred to me by an allopathic physician for her asthmatic complaints. Her response to allopathic medicines was temporary. In her interview, when I asked her what triggers her asthma & how it did start – she told – “we are from poor family. We live in 2 rooms – in one room, me & my parents stay & in the adjoining room, my uncle stays. My uncle is an aged man & he is also old asthmatic & bronchitis patient. I got my 1st attack – when at one night, I got up from a sound of my uncle’s coughing in the next room – his cough sound was so strong that we all got up from sleep. He was continually coughing & trying to spit out & at THAT MOMENT, I got a strong feeling – as if I will also get the similar kind of coughing & IN ACTUALITY, I started getting bouts of cough & started to feel difficulty in breathing. In a moment, my breathing difficulty was so strong that I started to feel as if my chest is compressed & there was no room in my chest to take a breath! I started struggling to take breath & wheezing sounds started from my chest with my every struggle to breath. Eventually, I was taken to hospital & they diagnosed it as asthma & started the treatment. Since then, I started to get asthmatic attacks off & on & most of the times – these attacks were triggered if I see or hear someone loudly coughing & spitting. She received the medicine – Phosphorus 1M to be repeated if required. With 1 week’s treatment – she described feeling much better. In next 6 months, she got hardly 3 or 4 asthmatic attacks but in least intensity & there was no need to take allopathic medicines at all & they subsided after repetition of the Homeopathic medicine. After 1 year, she didn’t get any further attack of asthma.

A case of Hidradenitis suppurativa

A 4th year dental student came to me on the suggestion of trying Homeopathic treatment, from his dermatologist.

He used to get recurrent abscesses with pus oozing from his both axillae & groin region & these complaints were there since almost 2-3 months – these were attended with intense pain at times & little fever during the pus formation stage, it used to temporarily subside with heavy antibiotics course from his dermatologist & once the effect of antibiotics was over, the complaints recurred. Patient also had big pimples on his face especially in beard area.

According to his dermaotologist, there is no permanent cure for this.

From his interview, few things I came to knew about him & those were – because of these pimples, he was reluctant to mix with his friends, to mingle in society, but even as a child, he was of little shy nature. He was a very studious and hardly mixed or went for outing with his college friends, on asking about this – he said that – I have certain image of myself in my mind & I want to become a good dentist & most important of above all – we are from a reputed family & I don’t want to spoil my image in the society – society should never point fingers at me saying – this is a spoiled man. I definitely will not like this & not my family also. He used to get recurrent dreams about snakes in his childhood.

During the interview, he told me that – in his 1st year of dental college, he had TB & had taken treatment for that for almost a year.

I began with the medicine – Silicea 1M & I had to change the strength of medicine in 10M, 50M. Then I prescribed him, 1 dose of Tuberculinum 1M & again Silicea in LM scale ranging from Silicea LM 3 to Silicea LM 6 – this medicine I asked him to take in water & asked him to repeat as many times as possible.

After 6 months of homeopathic treatment – he never complained of any boils or abscesses, no pimples & pus formation in axillae & groin region at all.

He is still in contact with me & even after 2 years of stopping his Homeopathic treatment – he had no complaints at all.

During the course of whole treatment, I asked him to stop using Deo spray & other perfumes as this was triggered with deo spray, in his case.